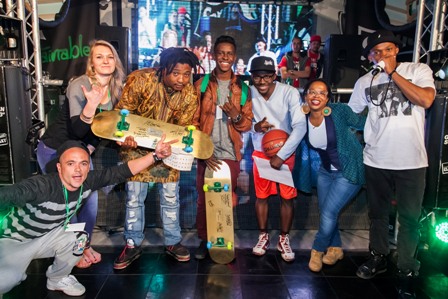 Sprite Uncontainable Finale and all the action that went down

On 2 August, Zone 6 was the place to be if you were down south in J-Sec last weekend where the Sprite Uncontainable finale took place. The Spite Uncontainable hip hop talent search is a nationwide search for South Africa’s most outspoken and uncontainable talent in dance, emceeing and graffiti, as well as basketball and the additional fan element that was introduced this year.  With C-Live as MC, the event was a non-stop crowd pleaser with live performances by the likes of the NBA Memphis Grizzlies Dunk Squad, pro skateboarders and hot MCs moving the crowd.

But it was all about the contestants who needed to bring their A-game as they battled it out on the night to decide who was the most uncontainable of them all. The MC winner was Luthando Dekeni aka Lolli “skoko sase nyanga”, a kwaito-inspired rapper from Nyanga East in Cape Town, now living in Pretoria. In the dance category it was Benny Chiloane as the victor all the way from Nelspruit. The graffiti winner was Charles Keylock aka “Riot”, a passionate graf writer from Randburg, Johannesburg, while the winner in the basketball category was Andile Zulu from Katlehong.

This year was slightly different from the last in that fan finalists were selected from submissions of a piece of their work such as a picture or a poem. At the finale they were paired up with MC, dance and graffiti finalists who used their fans submission as inspiration for their performance at the event. The fan finalists also played their part, promoting their finalist on social media leading up to the event, and for the first time, Shavon Etches, a BA law student at Wits University in Johannesburg took home the award for Fan Favourite.

True to hip hop form, the night came alive when headline international acts Pharoahe Monch and Jean Grae took to the stage. While Jean struggled to completely captivate the audience from the jump-off, I’m sure she would’ve wanted to be in Pharoahe’s shoes where the crowd screamed every lyric back at him in amazement. Local hip hop stars Revivolution, Reason, Tumi and Maggz pulled off stellar performances while dance crews Artistic Intelligence and Demolition Squad showcased their jaw-dropping floorwork.

DJ’s Vigilante, Vardz, P-Kuttah, Zakes and Mr X kept the beats banging on the decks during the night, setting the tone for the judges to make their decisions. The judging panel, made up of  Reason, Mernoly Simba and Mars were joined by Pharoahe Monch, and the public, to select the top contestants in each category. The winners walked away with a prize trip to New York in February next year for another uncontainable experience courtesy of Sprite.

“Sprite is committed to providing a platform and audience for youth to unleash their talent and express their true selves. The brand has been instrumental in the development of hip hop in the country and the fusion of the different hip hop elements that are a celebration of the lifestyle,” added Hlukani Rikhotso, Snr. Brand Manager for Sprite.