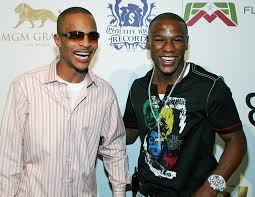 The King of ATL, rapper T.I, has had his run-ins with the law, to say the least. If fact, that’s the euphemism of the century. Drugs, domestic voice, guns, physical brawling, rap beef (Lil Flip, Ludacris, Shawto Lo, etc). T.I has been that guy. But every since he returned from his recent prison stint, the King has been on his best behaviour. Kissing babies, signing autographs, giving motivational talks at school; all that good samaritan stuff. He even rescued a suicidal man from jumping off a 22 story building in ATL after the cops were unsuccessful. But, as this past weekend’s activities display, you “you can take the man the man out the hood but you can’t take the hood out the man.”

As reported by TMZ yesterday, T.I and undefeated, five-division world champion boxer, Floyd ‘Money’ Mayweather got into a physical altercation over the weekend. And get this:  T.I, as short and scrawny as he is, is said to have picked the fight.

The story goes that T.I spotted Floyd eating at the American fast food franchise Fat Burger in Vegas, went over to his table, and started hallaring at him. He eventually took a swing at Floyd, the bodyguards stepped in, chairs were thrown, and all hell broke loose.

The fight may have occured because Mayweather was hanging out with Tiny, who took this photo with Floyd earlier in the night:

A video posted on TMZ shows Mayweather shouting across a swarm of security and patrons to T.I to “control your bitch.” And if you know anything about T.I, it’s that he would kill anyone at a second’s notice for his wife and his kids.

T.I and Tiny have been together since 2001, married in 2010 and have two sons together. The question is, why would she be getting cosy with Floyd knowing what her husband is capable of?

What do you guys think?