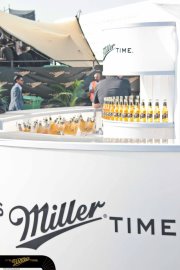 Earlier this year we covered AKA and Khuli Chana’s epic Miller Music Tour around the USA to Los Angeles, Las Vegas and San Francisco, where they had America getting down to foreign Motswak tunes. It seems Miller (@MGD_SA on Twitter) have no plans of slowing down when it comes to bringing the party to the people, and their infamous marquee at this year’s Durban July festival (the biggest of all the marquees at the event) was testimony of that.

The marquee, positioned perfectly between the race track and away from the other many marquees, played host to the dopest acts and personalities on the day. With an impressive stage set up that centred around other activities that included a fresh Adidas photo booth, Vodacom wi-fi room, a restaurant, elevated viewing box overlooking the track and a V.I.P pimpiiiiiing area where a few familiar faces were spotted; the likes of Shugasmakx, DJ Fanatic, C-live, Tumi Voster, DJ Sphectacula, Tumi Voster, DJ Speedsta and Forever Young stars Thomas Gumede (who is said to be pursuing a rap career under the name Tommy2Guns – we will upload his first single soon) and Lungile Radu, among others.

The event was hosted by 5FM presenter Poppy, and the performances on the day kicked off with our guy Zakwe (who’s performance surprisingly had all the white girls up on their feet – seriously) and then synced into a set by DJ Dimplez who typically murdered the dance floor. After Lulo Café, resident SAB DJ Tha Muzic and Cape Town group Good Luck took to stage, the event took a massive high when the show stopped to welcome Khuli and AKA on stage. The gruesome twosome brought the house down performing with a live band alongside DJ Raiko and twin sensation Major Leaguez (featured in the June/July issue) as they alternated on stage and then went on to performed their joint single ‘Bang’ to a uhm very merry crowd, to say the least (Miller bottles were flowing like an immaculate Busta Rhymes feature).

The evening took a slightly unfortunate turn when the aggressive winds caused the organisers to halt the show during AKA’s set. The silence was short-lived when shortly after, C-live showed up and played what can only be described as a rhythmic massacre, right before the show culminated with the baddest DJ Combo known to man, MVD –  Milkshake, Vigilante and Dimplez.

In its entirety, Miller brought fat rope chains, tailored suits, dark shades and phly kicks to an event what would’ve otherwise been a day of uhm enjoyable horse racing and err caviar and tea? We have to salute Miller for putting that corporate muscle behind local music and also bringing the party to people across the board everywhere. Big up to them and better believe we’ll see you all there next year!

Check out our photo gallery to see more images.