Processed with VSCO with g3 preset

Rising rapper, Richi Rich is not shy to represent Gomora in all its glory in his music.

Gomora, also known as Alexandra Township is known, among many other things, for abject poverty and being a stark contrast to its affluent neighbour Sandton. But within this colourful and lively township are people who are proud to be associated with it and in turn tell stories of the characters and lessons they have learnt from this place. Emerging rapper and possibly Gomora’s newest star, Richi Rich is a proud representation of where he comes from and his music is an obvious symbol of that. Have you met him yet?

Described as the leader of North Gomora, Richi Rich, real name, Khayalethu Richard Shikati, is a New Age Kwatio sensation whose music has heavy Trap sensibility. Richi Rich also calls himself the “Selfmade Cheeseboy”, an paradox similar to his concept of North Gomora. While the North is associated with lavish lifestyle, Gomora represents lack and this is exactly the point of his music- it is a symbol for these two extremes. And this is where, if you are inventive enough, you can create yourself to be whatever you want. “We come from disadvantaged backgrounds and North Gomora has helped nurture pride for where we come from; one road away from the richest square mile on the continent. There is a lot of history here and as young South Africans, we can’t leave it behind for an exclusively American-like style,” he writes.

For the rapper, it is imperative for him to tell authentic stories in his music. He raps about real life, bringing attention to the state of mind of a 25-year-old having to navigate life’s struggles while living in the township. He is also not shy to rap about the lifestyle he aspires to reach. He uses his pen to describe the pain and struggle of growing up in unfortunate circumstances which helps to put into context his often extravagant aspirations. 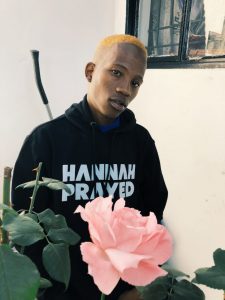 His extensive body of work includes projects such as ArtRap, GhettoFabulous and the more recent the North Gomora Mixtape.

The last released song he released is titled Dirty North and it’s an analysis of life in Gomora. He describes Dirty North as the ad-libs to his lifestyle and anthem to Alexandra. In this song, we get to hear the Gomtown fashionista commemorate the late Flabba and reassure the South African public that Alex Hip Hop is still to be reckoned with. The music video, which dropped late last year, reflects this.

Check out the video below and link up with him: